The Rapporteur of a European Parliament directive plays a crucial role at the second reading: he must forge a compromise with the Council of Ministers between the opinion expressed by the Parliament at the first reading and the common position adopted by the Council. If he succeeds, this compromise stands an excellent chance of becoming the report that comes to a vote in parliamentary committee, then reach a vote in plenary session by all Members of the European Parliament (MEPs). So the directive, the outcome of a consensus between the two legislative bodies, will become European law. If not, the Council and Parliament must reach an agreement for a third reading: the conciliation phase. In the spring of 2008 certain amendments threatened to insert into the telecoms package a measure that France is currently attempting to write into the “Creation and Internet/HADOPI” bill2See La Quadrature du Net’s entire file on this legal project (in French).: “graduated response/three-strikes approach”, which authorizes the entertainment industry to take the role of the police, and ISPs to punish Internet users by suspending their Internet connections, without going before a judicial authority. In the face of this threat, and as a result of intense lobbying by European citizens3See also the explanation by the European Data Protection Supervisor (EDPS), the independent European authority charged with protecting personal data., the European Parliament adopted—at its first reading on 24 September 2008—an amendment stating that “no restriction may be imposed on the rights and fundamental liberties of [Internet] end-users, without a prior ruling by the judicial authorities”. This effectively forbade suspending Internet access by a simple administrative decision. This amendment 138, supported by MEPs from all political groups4Among them Guy Bono (PSE), Daniel Cohn-Bendit (Verts), Zuzana Roithová (PPE), Michel Rocard (PSE), Marielle de Sarnez (ALDE), Christofer Fjellner (PPE), Rebecca Harms (Verts), Marco Cappato (ALDE), Jean-Luc Bennahmias (Verts), etc., returns and holds to a fundamental principle of democracy: the separation of powers. It was supported by 88% of the MEPs.

Second half: kick-off for Council Under strong pressure from Nicolas Sarkozy, taking advantage of French presidency of the European Union in November 2008, the Council of the EU (the ministers of the 27 Member States) categorically refused, with no valid reason, to retain amendment 138 in its common position. Moreover, flouting the respective competence of the institutions of the European Union, at a meeting on the banking crisis in October 2008 Sarkozy directly demanded of the Commission’s President, José Manuel Barroso, to withdraw amendment 138. The Commission quite logically refused the French President’s whim. 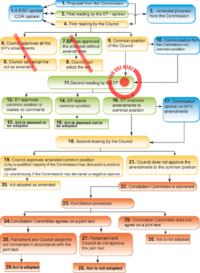 For its second reading in the European Parliament, where a plenary vote is expected on 5 May 2009, Rapporteur Catherine Trautmann naturally wants to resubmit amendment 138—renumbered amendment 46—because a huge majority of the European Parliament supported it at its first reading. Despite that, at a time when the French “graduated response” law has been unexpectedly delayed, the Council has redoubled pressure on Catherine Trautmann to abandon the amendment at second reading. Refusing twice the compromise formulations proposed by the Rapporteur, the Council first put forward a proposal suggested by France, replacing all references to “judicial authority” with the term “legally authorized”, which would reverse the amendment’s original meaning by authorizing graduated response à la française. The EU Rapporteur quite naturally found this reversal of meaning unacceptable.

A final meeting of Council diplomats is supposed to take place on the morning of 21 April, while in the European Parliament, the Industry, TRansport, and Energy committee (ITRE) responsible for the directive is expected to make its decision the same evening. To prepare for these meetings, the Council has finally proposed to reformulate the amendment as a “recital”, not as an article. This is a significant change, because only articles must be embodied in national law—and thus have legal force—while recitals are merely advisory.

But the European Parliament has already expressed its position twice—three times counting the approval of amendment 138 at first reading—against the principle of graduated response: by approving on 10 April 2008 an amendment to the report on cultural industries in Europe (Bono report) and last 26 March in approving the report on strengthening security and fundamental freedoms on the Internet (Lambrinidis report). But these two parliamentary initiatives, unlike a directive, are not legally binding, even if they express the firm opinion of Parliament. This means that the second reading of the telecoms package becomes the time to join deeds to words and definitively defeat the notion of graduated response for Europe.

On Tuesday, 21 April at 20:00, Rapporteur Catherine Trautmann has the weighty responsibility in Industry, TRansports and Energy committee (ITRE) to defend a stand that reflects the European Parliament’s expressed position in the name of the 500 million citizens that it represents: amendment 138/46 in its original form, or at least a version which ensures that only a court can impose punishment; and this in an article of the directive, not merely a recital. On the other hand, theoretically she could choose the alternative of abandoning this defense—as the Council wishes—and instead letting the position become a meaningless recital, thereby avoiding renegotiating it in the conciliation procedure.

Let us be confident that scarcely a month from the European elections of June 2009, Catherine Trautmann will stand up for fundamental rights for Europe’s citizens—especially freedom of expression, access to information and education, and the right to a fair trial and the separation of powers. So if the Council is prepared to sacrifice telecommunication reform in Europe in order to reject fundamental rights, then it will be entirely the Council’s responsibility that the matter ends up in conciliation.

At that point Catherine Trautmann will have shown how important it is to vote for a strong Parliament able to stand up for the citizens of Europe.