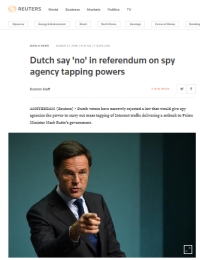 AMSTERDAM (Reuters) – Dutch voters have narrowly rejected a law that would give spy agencies the power to carry out mass tapping of Internet traffic delivering a setback to Prime Minister Mark Rutte’s government.

Dubbed the “trawling law” by opponents, the legislation would allow spy agencies to install wire taps targeting an entire geographic region or avenue of communication, store information for up to three years, and share it with allied spy agencies. […]

Bits of Freedom campaigned for a “no” vote, saying it feared privacy violations, although taps must be approved beforehand by an independent panel. […]