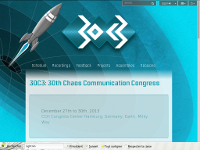 Lightning conference that Ante gave at the 30C3, the 30th Chaos communication conference of the German CCC, in Hamburg on 28 December 2013.

Investor-to-state dispute settlement (ISDS) gives multinationals the right to sue states before special tribunals if changes in law may lead to lower profits than expected. Multinationals can challenge environmental policies, health policies and reform of copyright and patent law. A growing number of civil society groups see ISDS as a threat to democracy.

ISDS gives multinationals the right to sue states before special tribunals if changes in law may lead to lower profits than expected. Multinationals can challenge reform of copyright and patent law, challenge environmental and health policies.

How does the ISDS system work?

On top of that, investor-to-state dispute settlement gives foreign investors the right to bypass the local court system and use international arbitration. Tribunals consisting of three investment lawyers decide the cases. These tribunals can overturn decisions of supreme courts.

Let me give three examples.

International investors and investment lawyers are natural allies. The small community of arbitrators is a captive in-crowd (they share ideas and interests with the investors). A very powerful captive in-crowd.

The ISDS tribunals can overturn decisions of supreme courts. ISDS is best understood as a transfer of sovereignty. It gives investors equal standing to states. And it gives investment lawers the power to decide in conflicts between investors and states.

There is no excuse for this. Nobel laureate in economics Joseph Stiglitz points out that companies can take an insurance against expropriation:

« There is no reason that foreign-owned property should be better protected than property owned by a country’s own citizens. Moreover, if constitutional guarantees are not enough to convince investors (…) foreigners can always avail themselves of expropriation insurance provided by the Multilateral Investment Guarantee Agency (a division of the World Bank) or numerous national organizations providing such insurance. » (Joseph Stiglitz, 2013)

He also explains what is really behind ISDS:

« But those supporting the investment agreements are not really concerned about protecting property rights, anyway. The real goal is to restrict governments’ ability to regulate and tax corporations – that is, to restrict their ability to impose responsibilities, not just uphold rights. Corporations are attempting to achieve by stealth – through secretly negotiated trade agreements – what they could not attain in an open political process. »

What can we do?

European countries signed many bilateral investment treaties, but since the Lisbon Treaty, the EU gained competence. From now on, the European Commission will negotiate and the European Parliament has a veto. We have a unique chance now to get things right. Consumer and environmental groups already did a lot of work. The parliament is critical about ISDS. The digital community can help to tip the scale.

Note that adding safeguards to the system is not enough. A powerful captive incrowd can always find a way around safeguards. The only solution is exclusion, no investor-to-state dispute settlement in EU trade agreements.

Next year, there will be elections for the European Parliament. I suggest we try to keep proponents of investor-to-state dispute settlement out of the parliament.