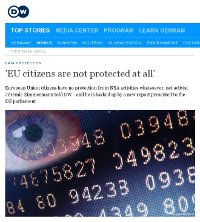 European Union citizens have no protection from NSA activities whatsoever, net activist Jérémie Zimmermann told DW – and he is backed up by a new report presented to the EU parliament.

An independent report on the US National Security Agency’s activities and their impact on the fundamental rights of European Union citizens was presented to the bloc’s parliament on Tuesday (24.09.2013). Its author Caspar Bowden provided an overview of the legal loopholes and controversies that dog the NSA’s programs, before offering a number of recommendations on what the EU could do about them – including placing warnings on US websites that personal data may be collected. Jérémie Zimmermann, spokesperson and co-founder of the Paris-based citizens’ rights group La Quadrature du Net, discussed them with DW. […]

« [The] study pretty much covers everything we advocate: first of all revoking the safe harbor – the safe harbor allows US companies to disregard EU law, provided that they respect a set of commitments, and it specifies that whenever one of these commitments is broken, the safe harbor can be revoked. With PRISM, all the requirements of the safe harbor have been broken at once, therefore it would be 100 percent legitimate for the EU to revoke it and start new negotiations with the US, with the upper hand. And nobody in the EU talks about it. »

« Number two, the EU could push an industrial policy that would encourage alternatives to companies that participate in state surveillance – which means free software, decentralized services, and end-to-end encryption technology, that would put control of personal data back into the hands of users. Technologies that liberate, rather than technologies that control. There is an avenue for public policies, and a market that is wide open for such technologies. And if we want to compete with the US, this is obviously the path to take. […] »