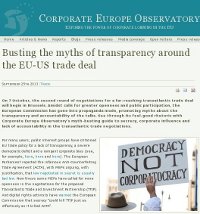 On 7 October, the second round of negotiations for a far-reaching transatlantic trade deal will begin in Brussels. Amidst calls for greater openness and public participation, the European Commission has gone into propaganda mode, promoting myths about the transparency and accountability of the talks. […]

[…] For a more democratic vision for European trade policy, take a look at the Alternative Trade Mandate Alliance, an alliance of currently almost 50 civil society groups (including Corporate Europe Observatory). […]

The proposed EU-US trade agreement hands over more power to corporations and further undermines our democracy. Busting the myths surrounding it and revealing the truth about this secretive deal is an important step in people taking back control over the democratic process. How long will the public stand being fobbed off by the Commission’s propaganda?