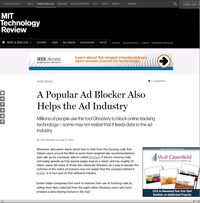 Millions of people use the tool Ghostery to block online tracking technology—some may not realize that it feeds data to the ad industry. […]

“Anything that gives people more transparency and control is good for the industry,” says Meyer, who says it’s fine with him that most Ghostery users opt not to share data with Evidon. Meyer points out that those who want to block online advertising are unlikely to respond to it, making Ghostery use good for both sides. Meyer also says that Ghostery users are presented with clear disclosures about how the company uses their data if they opt in. However, MIT Technology Review found that it was possible for a user to opt in without seeing the disclosures. […]

Meyer says that Evidon’s dual role will continue, and says the company is now working on a similar service to unmask the ad tracking built into many mobile apps. This month it acquired Mobilescope, a project started by privacy researchers that lets a smartphone user see the data that apps transfer and flags when sensitive data such as an e-mail address is transmitted (see “How to Detect Apps Leaking Your Data”). Techniques that profile a person’s use of apps on his phone to figure out how to target him with ads are booming, says Meyer, and so far it is mostly impossible to detect. “Nobody has any visibility into what happens in these apps,” he says. […]