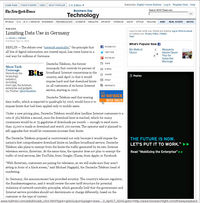 The debate over “network neutrality,” the principle that all bits of digital information are created equal, has come home in a real way for millions of Germans. […]

The Deutsche Telekom proposal is controversial not only because it would impose the nation’s first comprehensive download limits on landline broadband service; Deutsche Telekom also plans to exempt from the limits the traffic generated by its own Internet television service, Entertain. At the same time, the operator does not plan to exempt the traffic of rival services, like YouTube, from Google; iTunes, from Apple; or Facebook. […]

Deutsche Telekom has so far not said what its new broadband fees will be. Christian Fronczak, a spokesman for Ms. Aigner, said the consumer protection agency was worried that Deutsche Telekom would create a class system in which surfing would be available only to those consumers who could afford it. […]