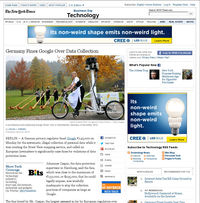 A German privacy regulator fined Google €145,000 on Monday for the systematic, illegal collection of personal data while it was creating the Street View mapping service, and called on European lawmakers to significantly raise fines for violations of data protection laws. […]

Fragments of personal e-mails, photographs and other unencrypted digital data were collected by Google’s fleet of Street View automobiles as they compiled panoramic maps covering about five million miles, or eight million kilometers, of roadway in 49 countries. […]

Google said it would not appeal the fine. […]