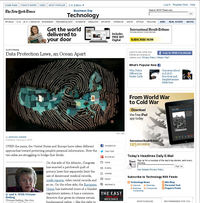 OVER the years, the United States and Europe have taken different approaches toward protecting people’s personal information. Now the two sides are struggling to bridge that divide. […]

From the perspective of some European legislators, however, United States representatives seem more interested in protecting commerce than consumers. The full-court American effort may have backfired, they say, pushing some European officials toward even broader measures. Last month, Jan Philipp Albrecht, a representative of the European Parliament who reviewed the draft regulation, proposed additional rights for citizens — like the right not to be subject to consumer profiling.

“My impression is that the U.S. Chamber of Commerce and the Commerce Department are mostly just following the interests of Silicon Valley,” he says. “This leads to heavy pressure on the European regulator, I can say.” […]