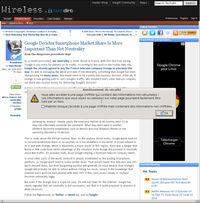 As a recent post noted, net neutrality is under threat in France, with ISPs like Free asking Google to pay extra for delivery of its traffic. According to this post on the Forbes Web site, Google has already agreed to pay the French telecoms company Orange in precisely this way. As well as damaging the whole principle of net neutrality, something that Google has been championing for many years, this would seem to be a pretty bad business decision. After all, if Orange is now getting paid to carry Google’s traffic, why shouldn’t every other telecom company out there also receive money for delivering Google’s services? […]

But even if the Orange deal is a special case, it’s still bad news for the Internet. Google has clearly signaled that net neutrality is not sacrosanct, and that it is quite prepared to abandon it when necessary.