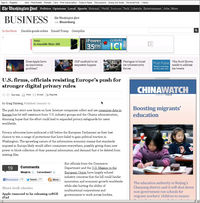 The push for strict new limits on how Internet companies collect and use consumer data in Europe hit stiff resistance from U.S. industry groups and the Obama administration, dimming hopes that the effort could lead to expanded privacy safeguards for users worldwide. […]

“This lobbying is somehow very one-sided to only protect Silicon Valley,” said Jan Philipp Albrecht, a German lawmaker from the Green Party who is a member of the committee reviewing the bill. U.S.-based privacy advocates have long favored an approach like the one in Europe, where privacy is regarded as a fundamental right and individual nations have data protection commissions to police how companies collect and use the personal information of their citizens. The United States, by contrast, has no overarching privacy law. […]