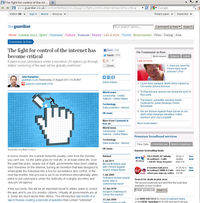 If plans to put cyberspace under a secretive UN agency go through, states’ censoring of the web will be globally enshrined […]

If this succeeds, this will be an important boost to states’ plans to censor the web and to use it to monitor citizens. Virtually all governments are at it. Some are much worse than others. The introduction last month of a law in Russia creating a blacklist of websites that contain « extremist » content was merely the latest example of an alarming trend. Authoritarian states have long seen cyberspace as the ultimate threat to their source of power. […]

The internationalisation of the internet is inevitable, and good. The question is not which countries are in charge, but where the power resides within countries. Control is always the first instinct of the state. The ITU summit in December marks just the start of the battle between those who wish to keep the internet (relatively) free and those who will do everything in their power to reverse the process.