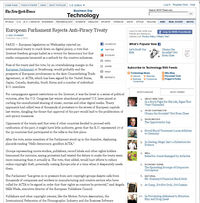 European legislators on Wednesday rejected an international treaty to crack down on digital piracy, a vote that Internet freedom groups hailed as a victory for democracy but that media companies lamented as a setback for the creative industries. […]

After the vote, some members of the Parliament stood up in the chamber, displaying placards reading “Hello democracy, goodbye ACTA.” […]

“It’s a crushing victory,” said Jérémie Zimmermann, spokesman for La Quadrature du Net, a group in Paris that was active in the treaty protests. “It’s a political symbol on an enormous scale, in which citizens of the world, connected by the Internet, have managed to defeat these powerful, entrenched industries.” […]