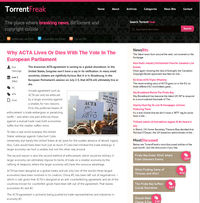 The draconian ACTA agreement is coming to a global showdown. In the United States, Congress won’t have a say in its ratification. In many small countries, citizens are rightfully furious. But it is in Strasbourg, in the European Parliament’s session on July 2-5, that ACTA will ultimately live or die. […]

No matter what you may have heard, ACTA is not dead. This beast is very much alive and for every cent us liberty activists spend on throwing it out, the corporations who want to own our culture and knowledge spend thousands on getting it passed. If you think you can sit back and relax now, those corporations couldn’t be better off – for they are moving in for the kill, lobbying-wise, as the final vote approaches in early July. If us activists consider the battle over, we will lose something that will take decades to repair once we’ve even started repairing it. […]

As the two next crucial votes approach, I’ll take the liberty to remind you here on TorrentFreak and on my own blog. For now, make sure to send a mail to those DEVE committee members!