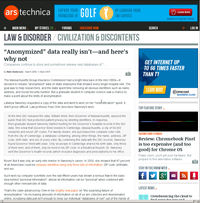 The Massachusetts Group Insurance Commission had a bright idea back in the mid-1990s—it decided to release « anonymized » data on state employees that showed every single hospital visit. The goal was to help researchers, and the state spent time removing all obvious identifiers such as name, address, and Social Security number. But a graduate student in computer science saw a chance to make a point about the limits of anonymization. […]

For almost every person on earth, there is at least one fact about them stored in a computer database that an adversary could use to blackmail, discriminate against, harass, or steal the identity of him or her. I mean more than mere embarrassment or inconvenience; I mean legally cognizable harm.