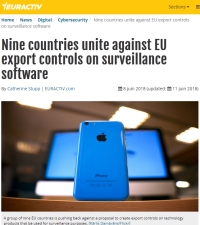 An EU proposal to impose export controls on technology products that can be used as spyware is at risk of being delayed as a group of nine countries have pushed back against the overhaul. […]

Nine countries, led by Sweden, have united against the proposal’s clampdown on exports of technology products that could be used to harm human rights.

New reports of such sales have continued to surface. In May, the NGO Access Now revealed that Turkey used software from the German firm FinFisher to monitor critics of the Turkish government.

But the future of the EU legislation is shaky. […]