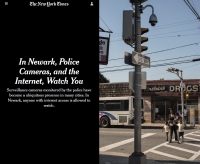 Surveillance cameras monitored by the police have become a ubiquitous presence in many cities. In Newark, anyone with internet access is allowed to watch […]

But the advent of the program has provoked alarm among civil liberties groups and privacy advocates. They argue that it opens a Pandora’s box of potentially devastating consequences for unsuspecting people and gives would-be stalkers or burglars a powerful tool for tracking their targets. They also argue that it pushes the police to rely heavily on the judgment of untrained civilians whose perception could be clouded by unconscious biases. […]