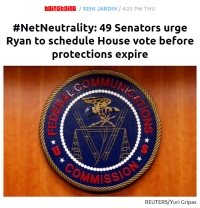 Under Trump’s FCC chief Ajit Pai, the Obama-era rules to help keep the internet free, fair, and equal will die next week.

Ryan’s office would not respond to reporters, and referred questions on Net Neutrality to the House Energy and Commerce Committee. […]