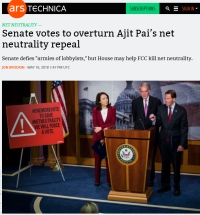 The US Senate today voted to reverse the Federal Communications Commission’s repeal of net neutrality rules, with all members of the Democratic caucus and three Republicans voting in favor of net neutrality. […]

Markey said that net neutrality rules are needed because of events like Comcast throttling BitTorrent traffic and AT&T blocking Skype and other voice applications that compete against its mobile phone service.

“ Net neutrality is the free speech issue of our time, ” Markey said.