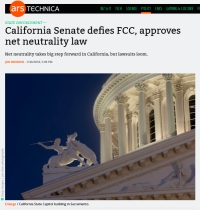 The FCC is already being sued by 21 states and the District of Columbia, which are trying to reverse the net neutrality repeal and the preemption of state laws. Attempts to enforce net neutrality rules at the state or local level could end up being challenged in separate lawsuits. […]