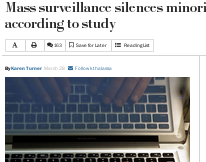 A new study shows that knowledge of government surveillance causes people to self-censor their dissenting opinions online. The research offers a sobering look at the oft-touted “democratizing” effect of social media and Internet access that bolsters minority opinion. […]

This research illustrates the silencing effect of participants’ dissenting opinions in the wake of widespread knowledge of government surveillance, as revealed by whistleblower Edward Snowden in 2013. […]

“It concerns me that surveillance seems to be enabling a culture of self-censorship because it further disenfranchises minority groups. And it is difficult to protect and extend the rights of these vulnerable populations when their voices aren’t part of the discussion. Democracy thrives on a diversity of ideas, and self-censorship starves it,” [Elizabeth Stoycheff, lead researcher of the study and assistant professor at Wayne State University] said. “Shifting this discussion so Americans understand that civil liberties are just as fundamental to the country’s long-term well-being as thwarting very rare terrorist attacks is a necessary move.” […]

[This article has been translated in French here]