Paris, 26 October 2015 — Tomorrow, MEPs will vote during the plenary session the Telecom Single Market regulation which includes a part on Net Neutrality, more than a year after their very positive vote. On the pretext that the dispositions, to be voted tomorrow, are less harmful that the Council’s version, a large majority of the MEPs are ready to come back on the breakthroughs of the previous version by approving a text that has too many loopholes to be adopted without being amended as it will put at risk our fundamental rights and liberties. 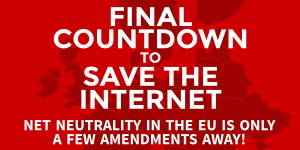 After years of efforts and mobilisation carried out by citizens and some MEPs in order to obtain a text that would ensure Net Neutrality and a first important breakthrough in April 2014. A majority of MEPs seem to plan to adopt the text presented tomorrow without amending it. This means approving the discrimination of Internet streams, only allowing access to the Internet’s benefits to citizens having the financial means to subscribe for a prioritised connection.

If, as during the previous vote (fr), most of Conservatives (EPP) will defend Telcos and their interests, but the Socialist group (S&D) and part of the Liberals (ALDE) seem to be ready to betray their vote of April 2014. Again their position will be decisive for the elaboration of the final text: by voting overwhelmingly for Net Neutrality — that is to say by supporting the amendments filing the gaps of the text — the S&D Group and ALDE have the power to save the Internet and show that they do not accept to establish an Internet for the rich and one for the poor.

Freedom of expression, right to information, free competition and innovation, the European Socialists and Liberals who will vote the text without amendments will be the gravediggers of our rights and freedoms! They will show their submission to telecommunications companies and their lack of courage and will give the idea that they only represent EU citizens before upcoming elections.

Do not let our representatives allow such a treason. La Quadrature du Net urges Europeans citizens to overwhelmingly call their representatives this afternoon to ask them to save the Internet until the vote Tuesday morning!

The vote will take place on Tuesday morning between 8.30 am and 10 am.