Paris, January 26, 2015 — Yesterday, MEP Julia Reda presented in the Committee on Legal Affairs (JURI) of the European Parliament a report on the harmonization of copyright in Europe. She tables modest but welcome proposals for a reform of copyright, several of which have been supported by La Quadrature du Net. 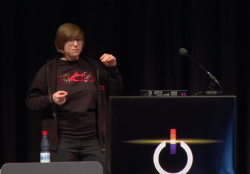 Noting that many problems remain in the harmonization at European level, and the failure of the current Directive to address users’ needs and practices, the German MEP Julia Reda (Greens/EFA) proposes to act on different levers to strengthen user rights. Her report especially encourages the promotion of the Public Domain, bringing down copyright term from 70 to 50 years after the author’s death. She also asks for all exceptions to copyright contained in the current Directive to become mandatory, so that no EU citizen can be deprived of their benefit by a too restrictive national legislation.

To free up innovative uses, Julia Reda proposes to extend some of the existing exceptions. Regarding the right to remix, mashup and other transformative uses, she calls for making the exception of citation applicable in the audiovisual field, and to admit the parody exception for non-humorous creations. In the area of research and teaching, Julia Reda proposes to expand the currently existing educational exception and to introduce a new exception for data mining (Text and Data Mining). She also encourages libraries to make works available in digital form, as an extension of their traditional mission of providing access to culture.

On the contrary to what is already supported by the proponents of a maximalist view of copyright, these proposals do not aim to “destroy copyright.” Instead, Julia Reda recalls in the preamble to her report the importance of recognizing protection for the benefit of creators, and the possibility for them to receive appropriate remuneration, even calling to strengthen their position against intermediaries like producers and publishers.

La Quadrature du Net welcomes these proposals, most of which are in the agenda of a positive reform of copyright defended by the association since the rejection of ACTA. However, it is very unfortunate that the issue of legalising non-commercial sharing between individuals was ignored. This is not only essential to the recognition of new rights of individuals over culture, but it also remains the best way to end the repressive spiral in which most EU countries are committed under the lobbying of cultural industries.

Save the aforementioned hesitation, La Quadrature du Net invites citizens to support and comment on the proposals in the Reda report and call MEPs from the European Parliament committees to vote in the proposed direction. The debate before the Committee on Legal Affairs (JURI) will take place on February 23 and 24, 2015 and a final vote in the plenary session is scheduled on April 20, 2015. Citizens, professional and amateur authors and artists, entrepreneurs, researchers, teachers, librarians have an common interest in the adoption of such a positive reform!

“It is time to measure the scope of the new uses allowed by the digital tools and to adapt copyright accordingly. The proposals of the Reda report will have a positive economic impact on creativity, and will boost research, education and access to culture. They must be supported as the first step in a positive reform of the European copyright!“ Said Lionel Maurel, member of the Strategic Orientation Council of La Quadrature du Net.