Paris, 16 October 2014 — After two days of debate, the French Senate just passed the “Terrorism” Bill [fr] on its first and only reading. While some senators have courageously fought against the intrusive provisions led by the Minister of Interior, Bernard Cazeneuve, La Quadrature du Net regrets that the truncated1The government chose to apply an accelerated procedure to this law which implies only one reading per Chamber with limited speaking times. legislative debate has failed to correct the unsuitable and dangerous provisions [fr] of this text. It will be examined by a Joint Commission in the coming weeks, where it will likely be adopted without any substantial change. 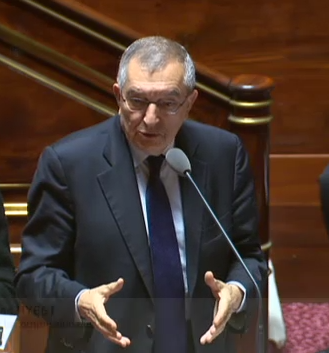 During the afternoon, Bernard Cazeneuve refused any change in his position, and all alerts coming from the civil society. The Bill was voted with all its dangerous provisions: ban from leaving the country, creation of individual terrorist entreprise offense, administrative blocking of websites, substantial changes to the criminal procedure beyond terrorist actions.

Even worse, the French Senate commited a serious violation of the equality principle before criminal law by reintegrating into the Bill the Article 4 concerning the glorification and provocation to terrorism into the press law of 1881 unless it is commited on the Internet. In the spirit of the Minister and few senators, the Internet is a danger in itself that needs derogatory measures: the vote of this amendment introduces a serious inequality between the Internet and other medias, a serious confusion between mean and content. This inequality has already been condemned by the Constitutional Court2The legal equality principle is an important principle that must be garanteed by the legislator. The Conseil Constitutionnel could declare unconstitutional an article that would create differenciated penalties for a same incrimation. Which it has in the n°2006-540 decision on the DAVDSI Law, July 27 2006, considerings 63 to 65..

The choice of the government to race the debate on this text using a totally unjustified accelerated procedure3September 25th 2014, the National Consultative Commission on Human Rights (CNCDH) released a very harsh opinion [fr] on this law, foremost because of the accelerated procedure chosen by the government – that in itself accentuates the risk of a foul wording of the law but also because “The CNCDH reminds the importance of a thoroughly conceived, stable, readable and coherent criminal policy, of a quality that should not be measured by standards of reactivity to minor news or contextual circumstances. Accumulation of reforms in security and criminal domains unfortunately reveals the extreme segmentation of the issues and too often a lack of perspective as a whole.”
(Our translation: La CNCDH rappelle l’importance d’une politique pénale réfléchie, cohérente, stable et lisible, dont la qualité ne se mesure pas à son degré de réactivité aux faits divers ou aux circonstances du moment. L’empilement des réformes dans les domaines sécuritaire et pénal révèle malheureusement l’extrême segmentation des sujets traités et, trop souvent, une absence de réflexion d’ensemble.) will have allowed to avoid any in-depth examination of the more dangerous dispositions – especially as 1/3 of the lowed Chamber was renewed right before the vote – despite the brave attempts of a few senators. The text, slightly different from that voted by the higher Chamber will be harmonised by a Joint Commission within the coming weeks before final adoption with mere changes.

“If the senators have made a real effort on this harmful bill, it has unfortunately been voted with all the dangerous dispositions that were denouced during the last months by La Quadrature du Net, an important number of Internet’s actors and defensors of public liberties. Could we hope for a spark of courage from our representatives in order to carry that text in front of the Constitutional Court in order to verify its conformity with the founding text of the 5th Republic? In a democracy, the representatives should not fear such an examination. We cannot tolerate an inadapted treatment of this utterly important matter, that is the fight against terrorism”, declares Adrienne Charmet, campaign coordinator at La Quadrature du Net.