Paris, 5 December 2013 – On Monday 9th December, the rapporteur Pilar del Castillo Vera (EPP – Spain) will present to the “Industry” (ITRE) Committee of the European Parliament her draft report on Neelie Kroes’ proposal for a Regulation on the Telecom Package. Citizens must urge MEPs to amend this report in order to accurately define what qualifies as ‘specialised services‘ with ‘enhanced‘ quality of service, and ensure that the Regulation will guarantee a genuine and unconditional Net neutrality principle. 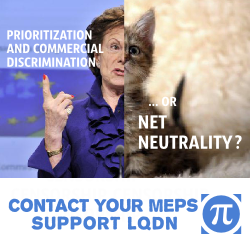 The proposal for a Regulation on the Telecom Package, issued by Neelie Kroes on September 11th despite vivid criticisms from both outside1As an example, the European Data Protection Supervisor stated in a press release published on November 15th that the Neelie Kroes’ proposal devoids “of substance” the Net neutrality principle “because of the almost unlimited right of providers to manage Internet traffic”. Citizen organisations also widely criticized the proposal. and inside the Commission2A leaked criticism of a draft by EU Commissioner Viviane Redding’s services says for example “such limited possibilities of accessing Internet content and services of their choice would run counter to the stated objectives of the EU Charter of Fundamental Rights”: http://www.edri.org/NN-negativeopinions, pretends to defend the Net neutrality principle by stating in its article 23.5 that “providers of Internet access services shall not restrict the freedoms [of communication] by blocking, slowing down, degrading or discriminating against specific content, applications or services”3Proposal for a Regulation on the single market for electronic communications, Article 23.5: “Within the limits of any contractually agreed data volumes or speeds for Internet access services, providers of Internet access services shall not restrict the freedoms provided for in paragraph 1 by blocking, slowing down, degrading or discriminating against specific content, applications or services, or specific classes thereof, except in cases where it is necessary to apply reasonable traffic management measures. Reasonable traffic management measures shall be transparent, non-discriminatory, proportionate and necessary to:
a) implement a legislative provision or a court order, or prevent or impede serious crimes;
b) preserve the integrity and security of the network, services provided via this network, and the end-users’ terminals;
c) prevent the transmission of unsolicited communications to end-users who have given their prior consent to such restrictive measures;
d) minimise the effects of temporary or exceptional network congestion provided that equivalent types of traffic are treated equally.
”.

Ironically, the proposal actually breaches this principle right before introducing it, allowing in its article 23.2 the provision of “specialised service […] with an enhanced quality of service” – that is to say services offering prioritization. Although it might be acceptable to prioritize services on private networks as long as they do not unfairly compete with existing Internet services4As for the priorization of existing Internet services, La Quadrature du Net takes the view that after the adoption of the Regulation, a reflection should be launched to consider the possibility of allowing priorization of Internet communications, as long as three main conditions are met:

Citizens must urge MEPs to amend the draft regulation, in particular to better specify the nature and the characteristics of specialised services:

MEPs must also better define Net neutrality (article 23.1) to cover the freedom to connect any hardware to the network (in particular servers so as to promote self-hosting which can play a key role in empowering citizens in relation to their Internet communications), and also set out effective enforcement procedures and sanctions against those who violate the crucial principle of Net neutrality.

“Neelie Kroes and the text’s rapporteur at the EU Parliament are trying to legitimate prioritizations in favor of dominant Internet companies through an outrageous reversal of the concept of ‘specialised services’. Discrimination of Internet services would severely undermine the decentralized architecture that has made the Internet work so well for the past decades. We cannot let telecom operators decide what information we can access and how we can access it without renouncing to the Internet’s empowerment and potential for creativity and innovation. Citizens must contact their MEPs and urge them to properly define ‘specialised services’ so as to ensure that they take place on closed networks and do not unfairly compete with existing Internet services” concluded Félix Tréguer, cofounder of the association La Quadrature du Net.

As a citizen platform, La Quadrature du Net provides the PiPhone, a web tool allowing to call Members of the ITRE Committee free of charge: