Paris, 11 September 2013 – Amid strong criticisms both inside and outside the European Commission, Neelie Kroes decided to rush the adoption of her draft telecom legislation, which includes very controversial anti-Net neutrality proposals. Commissioner Kroes, who spent the whole legislature denying the very need for legislative action on the topic, is now rushing a flawed lobby-driven text, in complete disrespect of European citizens. The ball is now in the hands of the European Parliament, just months ahead of upcoming elections. 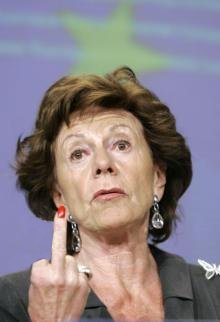 As with the working versions leaked in the past weeks, and despite vivid criticisms both outside and inside the Commission1A leaked criticism of a draft by Viviane Redding’s services says for example “such limited possibilities of accessing Internet content and services of their choice would run counter to the stated objectives of the EU Charter of Fundamental Rights.”: http://www.edri.org/NN-negativeopinions, the regulation adopted today by the European Commission2La Quadrature du Net accessed a draft dated 10-09-2013 under embargo contains dangerous fake Net neutrality proposals. This flawed text pretends to defend the principle of Net neutrality by banning blocking and throttling of Internet communications3Item “Rights of end-users” of the text:
“To guarantee an appropriate level of consumer protection across the EU, rules defining the rights of end-users are harmonised, including:
– the obligation on providers to provide unhindered connection to all content, applications or services being accessed by end-users – also referred to as Net Neutrality – while regulating the use of traffic management measures by operators in respect of general internet access. At the same time, the legal framework for specialised services with enhanced quality is clarified.” but makes it completely meaningless by explicitly allowing undue commercial discrimination through prioritization (art.23.2)4“23.2 End-users shall also be free to agree with either providers of electronic communications to the public or with providers of content, applications and services on the provision of specialised services with an enhanced quality of service.”
Prioritization is another word for the more technical term of “guaranteed” or “differentiated” “Quality of Service”, as opposed to the traditional “best-effort” model for the delivery of Internet traffic and means that all that is not prioritized is in practice de-prioritized.

A few months before the end of her mandate and after years of promises and consultations on Net neutrality, Neelie Kroes is giving in to the long-lasting demand of operators, in a major instance of corporate policy capture5See our analysis on the ETICS consortium and its ties to Kroes’ proposal: https://www.laquadrature.net/en/neelie-kroes-pushing-telcos-agenda-to-end-net-neutrality, burying at the same time the proposals of civil society and the protection of the public interest.

This dangerous legislative text will be officially presented tomorrow by the EU Commission. More than ever, citizens need to make their voices heard and ensure that their elected representatives in the European Parliament oppose Neelie Kroes’ model. Instead, the Parliament must enact strong protections for the free and open Internet.

“Neelie Kroes is consciously betraying EU citizens by giving in to the powerful telecom lobbies. Mrs Kroes’ draft is flawed by design to allow commercial breaches of Net neutrality, through forms of discrimination which undermine our freedom of communication and are anti-competitive by nature. Rushing such measures, a few months before upcoming elections, is outrageous and shows the profoundly disturbing disconnection between the Commission and citizens. The Parliament must replace this section of the text by provisions guaranteeing the enforcement of a true and unconditional Net neutrality in order to defend the public interest.” declared Jérémie Zimmermann, co-founder and spokesperson of the citizen organisation La Quadrature du Net.