Paris, 19 July 2013 — Since last week, after citizen groups started criticizing the EU Commission over its leaked draft regulation threatening to kill Net neutrality, Commissioner Neelie Kroes and her staff have tried to defend their proposal on Twitter, arguing that these criticisms were “misleading European citizens”. Here is a summary of what was said, not said, and how it reveals that these criticisms are absolutely right.

Late last week, after EDRi leaked the EU Commission’s “draft regulation on a telecom single market“, citizen groups like Bits of Freedom, Netzpolitik and La Quadrature du Net slammed the proposal for aiming to kill Net neutrality under the guise of defending it.

What is in the Commission’s proposal?

While seemingly defending Net neutrality principle by banning blocking and throttling Internet communications1The Commission provides a vague, brief but seemingly accurate description of Net neutrality: “End-users shall be free to access and distribute information and content, run applications and use services of their choice.”, the Commission wants to make it meaningless by explicitly allowing prioritization, which is another form of discrimination (prioritization is another word for the more technical term of “guaranteed” or “differentiated” “Quality of Service”, as opposed to the traditional “best-effort” model for the delivery of Internet traffic)2“(…) Providers of content, applications and services and providers of electronic communications to the public shall be free to agree with each other on the treatment of the related data volumes or on the transmission of traffic with a defined quality of service.”.

What is more, the draft text also proposes that, “in the pursuit of the foregoing freedom (sic)”, telecom operators should be free to impose data caps on users3“End-users shall be free to agree on data volumes, speeds and general quality characteristics with providers of electronic communications to the public and, in accordance with any such agreements relative to data volumes, to avail of any offers by providers of content, applications and services, including offers with defined quality of service.”. Finally, it aims at preventing national authorities from protecting online freedom of expression and innovation by introducing real protections for Net neutrality4“The exercise of these freedoms shall not be restricted by national competent authorities, or, as regards the freedom laid down for end-users, by providers of electronic communications to the public, save in accordance with the provisions of this Regulation, the Directives and other provisions of Union law.”.

From the leaked document, it seems clear that far from introducing a real protection for the open and neutral Internet, the EU Commissioner for the Digital Agenda Neelie Kroes wants to grant the telecom lobby its long-lasting demand to implement traffic management measures and pricing schemes that would boost their revenues at the expense of freedom of communication and innovation.

However, the Commission reacted angrily to the criticisms by civil society groups, attacking our credibility and saying that we were misleading EU citizens. First, Ryan Heath, the spokesperson of Neelie Kroes, sought to contradict our interpretations (note: in order to reflect his alleged commitment to Net neutrality, Mr. Heath even changed his avatar in the course of the feverish exchanges):

Then, Commissioner Kroes herself (also Vice-President of the Commission) went ahead and directly tried to undermine the credibility of both Netzpolitik and La Quadrature du Net:

As we explain below, these accusations are both ill-founded, hypocritical and unacceptable.

Traffic prioritization: A long-lasting demand of the telecom lobby

La Quadrature and other advocacy groups have said that by allowing prioritization, the Commission would be giving in to the telecoms lobby’s long-lasting demand to enter into business deals with big content providers such as Google, Facebook or traditional broadcasters to prioritise their data flows over the Internet5In early-2010, for instance, the CEO of Telefonica declared that “Internet search engines use our Net without paying anything at all, which is good for them but bad for us. It is obvious that this situation must change, our strategy is to change this”. eitb.com, 6 February 2010, Spanish Telefónica to charge Google, Yahoo, Bing..

Such a law condoning prioritization would not be something coming out of the blue. During last year’s debate on the WCIT, the Brussels-based lobby of dominant telecom operators, ETNO, proposed amendments to the founding treaty of the International Telecoms Union (ITU) that would have imposed “differentiated Quality of Service” (i.e. prioritization) worldwide.

At the time, ETNO said the ITU’s founding treaty should “enable incremental revenues by end‐to‐end QoS pricing and content value pricing” and allow for “new interconnection policies based on the differentiation of the QoS parameters for specific services and types of traffic (not only on the “volume”)”. That, they said, should be part of the “Internet ecosystem” (i.e. not just for so-called “managed services” or “specialized services”, which are private IP networks distinct from the public Internet). Back then, the ETNO chairman, Luigi Gambardella also dismissed any claims that these amendments would put an end to Net neutrality as “false information” and bad “propaganda“.

Fortunately, after a mobilization of civil society – and in spite of the tacit support ETNO apparently benefited from the EU Commission and some Member States governments such as France – these dangerous amendments were eventually rejected at the ITU summit in Dubai.

Providers of content, applications and services and providers of electronic communications to the public shall be free to agree with each other on the treatment of the related data volumes or on the transmission of traffic with a defined quality of service.

It should be of no surprise, then, that a EU trade group for cable TV providers, Cable Europe, was recently reported in the Financial Times to welcome the so-called “Net-Neutrality provision” of the draft regulation, since it “allows operators to enter into commercial agreements with Internet content providers over certain services”. This analysis is also confirmed by a recent report of the consultancy Cullen International, who also analyzed the leaked text:

At this stage, the Commission has not contradicted Cable Europe or Cullen’s analysis. Only civil society groups have been criticized on Twitter, with the Commission refusing to acknowledge that it is pushing for prioritization. 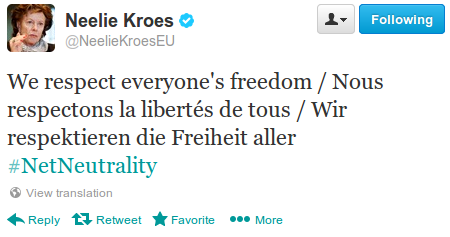 Instead, the Commission sticks to its spin: it maintains that by preventing blocking and throttling, it is protecting Net neutrality. But it cannot ignore (or else it is worryingly incompetent) that established definitions of this crucial principle stress that non-discrimination is to be understood as the “homogeneous treatment of flows”, as a French parliamentary report rightly pointed out two years ago. And it is well aware that from a technical point of view, prioritizing some traffic necessarily means that all other data streams will be slowed down.

Whether it is blocking, throttling or prioritizing Internet communications, discriminatory traffic management practices imposed by telecom operators are unacceptable. The Commission’s refusal to acknowledge the fundamental flaws of its so-called “Net neutrality provision” is both shallow and hypocritical. Especially when one considers that its defense of the “telcos’ freedom” clearly shows what its real intentions are:

Discrimination and data-caps: the price for better networks and services?

But why is the Commission so keen on giving telecoms operators a free hand in making deals with big content providers? As pointed out above, Neelie Kroes and her staff are desperately trying to boost investment in faster networks across the EU, while at the same time decreasing roaming charges to appear “consumer-friendly”. These consensual objectives are Kroes’ main political priorities, to the extent that she is ready to sacrifice the open Internet and unlimited access offers by allowing data-caps so as to boost telcos’ revenues. In return, she naively hopes that operators will use the extra money to invest in new, better networks.

Such a plan is downright harmful, and once again shows the Commission’s bias toward the position of the telecom lobby. As La Quadrature wrote in 2009:

Net Neutrality has made Internet the one invention in the history of mankind that has scaled seamlessly from an experiment connecting 4 or 5 local networks of research centers to a global network connecting a billion and a half humans [now close to 2,5 billions], and on which information is transmitted that represents ten orders of magnitude more traffic in 20 years (10000 millions times)6Andrew Odlyzko, Internet traffic growth: Sources and implications: http://www.dtc.umn.edu/~odlyzko/doc/itcom.internet.growth.pdf
There is debate on whether this ability to scale up is today endangered by an acceleration of the growth rate of traffic. Andrew Odlyzko, the leading expert on Internet statistics and modeling stresses that this claim is not founded. See Andrew Odlyzko, Threats to the Internet: Too Much or Too Little Growth?, http://www.internetevolution.com/author.asp?section_id=592&doc_id=146747&.. With the arrival of new technologies, Internet applications became more sophisticated and more demanding in terms of network capacities. To deliver these innovative services to end-users, telecoms operators have invested in more bandwidth.

This is the Internet’s historical model of growth, one that is at threat if operators are allowed to profit from congestion and manage the growth of traffic through data-caps, volume-based pricing schemes and business arrangements for prioritizing just a few content providers. There is just no public-interest economic rationale for the Commission’s approach7For instance, on data-caps, Neelie Kroes says: “I’m not going to use more than a few Megabytes a month on my smartphone, why should I be forced to subsidise someone using far more?”. This might sound common-sense, but it’s actually economic non-sense. According to the French NRA Arcep, the cost that ISPs have to cover for their subscribers’ varying traffic volumes are very low. On average, it is of the order of 2€ a month per subscriber, part of which (1 to 1,5€) varies according to whether the subscriber is a heavy bandwidth user or not. The “subsidy” is therefore so small, and the public interest of fostering unlimited access to the Internet so obvious, that Kroes’ argument does not resist scrutiny. See: https://papers.ssrn.com/sol3/papers.cfm?abstract_id=2244335 (p. 6). The direct effect of such practices is to disincentivise investment in more network capacities (even though the price of bandwidth is rapidly decreasing, and despite the fact that the global rate of traffic growth in percentage terms is declining over time). Blind to this economic reality, the Commission argues that its proposal is the only way to go:

If the Commission really was serious about fostering better Internet access and innovation across the EU, it would stick to current offerings where pricing is based first and foremost on speeds, and launch a debate on allowing end-user-controlled quality of service8See the work of prof. Barbara van Schewick: https://cyberlaw.stanford.edu/blog/2012/06/network-non-discrimination-and-quality-service. Beyond economic models, it would push for ambitious open spectrum policies, encourage citizen organizations working all over the continent to provide alternative and cheap Internet access9A list of such organizations working on wireless Internet access can be found here: http://www.laquadrature.net/wiki/Community_Wireless_Networks_in_Europe, and better regulate the billions of euros of subsidies to ensure that they form part of the Internet commons rather than reinforcing dominant telecoms operators.

After ACTA and many other policy initiatives, the EU Commission is once again giving in to big corporations at the expense of the public interest. It acts as a pretentious technocratic body, overly confident that it has the one perfect answer to a policy problem.

And again, it resorts to shameless personal attacks and newspeak, calling Net neutrality what it knows is not, lying to EU citizens and blaming citizen groups who are only trying to engage in a democratic debate of prime importance for the future of the Internet.

At the beginning of her mandate, during her confirmation hearing at the EU Parliament, Neelie Kroes made a unequivocal statement against commercially-motivated anti-Net neutrality practices. Since then, she has constantly sided with the telecom lobby on this fundamental question. By now, citizens have learned she cannot be trusted.