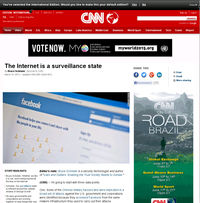 […] The Internet is a surveillance state. Whether we admit it to ourselves or not, and whether we like it or not, we’re being tracked all the time. Google tracks us, both on its pages and on other pages it has access to. Facebook does the same; it even tracks non-Facebook users. Apple tracks us on our iPhones and iPads. One reporter used a tool called Collusion to track who was tracking him; 105 companies tracked his Internet use during one 36-hour period.

Increasingly, what we do on the Internet is being combined with other data about us. Unmasking Broadwell’s identity involved correlating her Internet activity with her hotel stays. Everything we do now involves computers, and computers produce data as a natural by-product. Everything is now being saved and correlated, and many big-data companies make money by building up intimate profiles of our lives from a variety of sources. […]