Paris, 13 May 2013 — Pierre Lescure has handed in his report [fr] on culture at the digital era to French President François Hollande1Pierre Lescure lead a committee advising the French government on the future of copyright law Hadopi, the French “three strikes” administration.. La Quadrature du Net denounces a flawed political process revealing the harmful influence of industrial groups at all levels of policy-making. How will the French government react to Lescure’s proposal to expand the scope of competence of the audiovisual media regulator (CSA) to the Internet? Will it to pursue former President Sarkozy’s anti-sharing policies and even supplement them with new ACTA-like measures encouraging online intermediaries to become private copyright police? 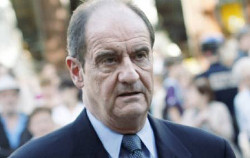 After difficult arbitrations, the Lescure mission finally delivered its report. La Quadrature du Net once again stresses its indignation in the face of the outsourcing of policy-making to an individual symbolizing the collusion of industry and media interests with political personnel2It was Pierre Lescure himself who proposed François Hollande to lead this mission, stating that it was his friendship with the then-candidate to the Presidency that afforded him to do so. After having been Canal + CEO just before Denis Olivennes signed the report that bore his name and triggered the creation of the Hadopi, Pierre Lescure currently sits on the Boards of Havas, Lagardère and two companies heavily involved in DRMs: Kudelski and Technocolor..

The reports’ content is very eclectic. It doesn’t elude the issues of not-for-profit sharing – regarding which the report says that further “reflexion must be pursued” – or of La Quadrature du Net’s proposals. It also shows interest for Creative Common licenses, remixes or mashups. But when it comes to concrete proposals regarding sharing of cultural works on the Internet, it quickly gives in to the arguments of the content distribution industry. The proposals are carbon copies of the policies suggested by the corresponding lobbies: After the failure and massive citizen rejection of the direct repression of sharing, automatic sanctions and mass intimidation (HADOPI-style), the report still calls for news measures to pressure intermediaries into becoming a private copyright police force, in the spirit of the defunct SOPA-PIPA bills in the US or the ACTA trade agreement at the international level.

“Besides the extension of the scope of the CSA’s3The Conseil supérieur de l’audiovisuel (CSA) is the regulatory authority for TV and radio. competence to cover Internet communications, Pierre Lescure recommends for the French government to implement the same measures as those pushed through ACTA and the US SOPA bill, and which have been massively rejected by both citizens and Parliaments. The aim is to put in place private censorship, filtering or communication blocking mechanisms, all in the name of fighting copyright infringements. As making these provisions compulsory would be illegal with regard to European law, Pierre Lescure argues for passing them through soft-law, contract law or threats on intermediaries, in order to turn these actors into a private copyright police force.” declares Jérémie Zimmermann, spokesperson for the citizen organisation La Quadrature du Net.

“The announcement of the suppression of the Hadopi is misleading: its missions are redistributed to other entities (CSA), with the exception of the never-applied internet cut-off, and even completed by new monitoring or repressive competence. It hides the pursuit of Nicolas Sarkozy’s anti-sharing policies. The government will be judged on its ability to resist the harmful influence of the entertainment industry to whom the conception of policies has been delegated by the governments one after the other.” concludes Philippe Aigrain, co-founder of La Quadrature du Net.