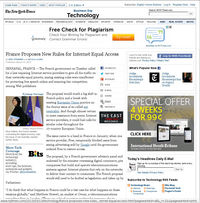 The French government on Tuesday called for a law requiring Internet service providers to give all the traffic on their networks equal priority, saying existing rules were insufficient for protecting free speech online and ensuring fair competition among Web publishers. […]

“Our goal is to support the vision of an Internet that is free, open, respectful of rights and that is a driver of innovation,” Ms. Pellerin said.

The proposal comes as the Hollande government has been discussing new curbs on other digital policy fronts. There has been talk, for example, of measures to restrict hate speech on social networks like Twitter, following a spate of anti-Semitic and racist postings on the microblogging site. How such a measure could be reconciled with legislation guaranteeing “neutrality” on social networks left some analysts scratching their heads.

“It would be hypocritical to enlarge the exceptions to free speech at the same time as legislating for network neutrality in the name of free speech,” said Jérémie Zimmermann, a spokesman for La Quadrature du Net, a group that opposes any type of restrictions on information on the Internet.

France would not be the first European country to legislate on net neutrality issues. […]