Brussels, May 30th, 2012 – In the first official assessement of the Internet access restrictions imposed by Internet access providers, EU telecom regulators depict a very alarming situation. The Internet as we know it is very much at threat, and the EU Commission’s reluctance to take any resolute action on the matter is irresponsible. Like in the Netherlands where the Dutch Parliament adopted a Net Neutrality law earlier this month, Net Neutrality must be enacted into European law. 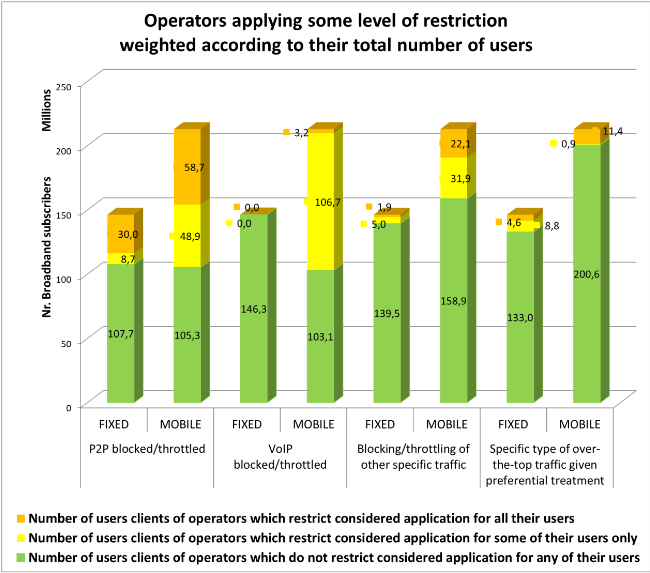 Thanks to this just-released study on traffic management and Internet access restrictions, EU policy-makers now have evidence that the situation requires action. The pro-competition, pro-transparency policies pushed by the EU Commission since 2009 can no longer be deemed sufficient.

“As the BEREC study clearly shows, telecoms operators are increasingly restricting their users’ communications. Specific ports or protocols are often blocked, without adequate justification, and partner-services are being privileged at the expense of the rest of the Internet. The Net is being fragmented and innovators constrained, while big American online companies such as Google and Facebook make deals with access providers. In this context, the transparency approach pushed by the EU Commission comes down to whitewashing these ongoing practices”, said Jérémie Zimmermann, co-founder and spokesperson of La Quadrature du Net.

Neelies Kroes reacted to the BEREC findings, recognising that there was a problem, especially with the use of privacy-invasive monitoring of people’s Internet traffic. She made a few proposals to which she already hinted last year, such as allowing consumers to switch more easily their provider while ensuring transparency regarding applied restrictions. But as La Quadrature has stressed multiple times over the past years, this can’t be enough1EU regulators have been putting pressure on operators through working groups and recommendations, and plan a coordinated action at the EU level through BEREC. But ongoing efforts, in France in particular, show that existing regulatory tools are hardly effective to protect the free and neutral Internet. The French regulator Arcep has been convening working groups for the past months. One on Quality of Service, the other one on Transparency. The latter shows a worrying lack of regulatory power on the part of public authorities to address the worse practice, even though they often understand the need to protect network neutrality.. If the Commission really wants to protect fundamental rights online and incentivise investment in new networks2According to Kroes, data caps “incentivise ISPs to price data volumes in ways that reflect costs”. Such claim is contradicted by economic studies on the price of bandwidth. See http://www.pingzine.com/global-bandwidth-costs-decreasing/ and http://arstechnica.com/tech-policy/2011/03/att-officially-announces-data-caps-wont-talk-about-congestion/
Like with roaming regulation, the Commission must protect consumers from harmful pricing models., it must legislate on the matter and provide strong legal protections for the free Internet.

“Commissioner Nellie Kroes’ proposals refer soundly to the long standing principle of Net Neutrality, but they will have no effect if they fall short of decisive action. Net neutrality must be made into EU law, and provide a stricter framework paving the way for fine-tuned but effective regulation. As Mrs. Kroes timidly suggests, it is indeed of the utmost importance to ban operators from using the word “Internet” if they block, throttle or charge differently for specific Internet services and applications. Privacy invasive traffic monitoring practices must also be prohibited. All the data is on the table, now we need action.” concluded Zimmermann.

The Commission’s unfortunate lack of willingness to actually enforce Net neutrality shows that the EU Parliament and national lawmakers will have play a key role in pushing for meaningful measures in the next months, and so will citizens.

BEREC will conduct a consultation on various guidelines related to its findings on traffic management. Deadline is July 31st, 2012.

Timeline on Net Neutrality in the EU

Key excerpts of the BEREC study