Over the last two weeks, events have radically altered the course of the debate on ACTA and its ratification procedure, both at the EU and Member States levels. The tremendous citizen pressure definitely had an effect and altered the balance of power. Scared that ACTA might promptly be rejected, EU Commissioner De Gucht managed to delay the procedure by one or two years. With clear objectives in mind, it might be time to look also beyond ACTA to understand how we can collectively attempt to protect our freedoms online while fixing the broken copyright regime currently waging war on the free Internet.

ACTA may already be dead

We, citizens, can be proud

During last week’s public workshop on ACTA, held in presence of Commissioner Karel De Gucht and moderated by MEP Vital Moreira, chairman of the INTA committee1INTA is the leading committee on ACTA in the Parliament, the manifest tension made it obvious: the Parliament and the Commission are now afraid of citizens,and of the streets. What we saw during the workshop was a parody of debate, where speakers were either members of the Commission, academics, or among the few of the remaining ACTA proponents (including the chairman of a pro-ACTA lobby2Olivier Vrins “is also a member of the Anti-Counterfeiting Committee of ECTA, INTA and AIPPI”. See http://conference.ecta.org/IMG/pdf/vrins_cv.pdf!). Nobody from authors, artists or citizen groups were allowed on the panels, despite La Quadrature’s demand to participate.

However, Professor Michael Geist wasn’t as tame as those who invited him might have expected. His sharp brief3http://www.michaelgeist.ca/content/view/6356/125/ meticulously detailed most of the points that make ACTA totally unacceptable and illegitimate. When the audience vigorously applauded his intervention, chairman Moreira felt so uncomfortable that he threatened to exclude anyone from the audience found to be “protesting”, in essence banning clapping from a public workshop in the European Parliament. The audience was also forbidden from providing reading material for participants. Most MEPs asking questions to the panellists were against ACTA, as were the few lucky members of the audience (filling up two meeting rooms) who arrived early enough to queue to register for questions, each limited to a minute. Organizing rigged debates while pretending to listen to civil society after ACTA has been signed will not change a thing at this stage for Karel De Gucht, nor for MEP Vital Moreira, desperately trying to help him.

“If the vote was now, ACTA would be defeated.” This sentence was heard in private many times in the corridors of European Parliament, from Members, assistants, and staffers of all political groups. It is a fact that most in the Parliament take for granted: ACTA has become so much of a political issue and been met with such uproar from civil society, the biggest political group –the conservative EPP– is so divided over it, and the final text so ambiguous, that ACTA wouldn’t stand a chance if put to vote in the next months. 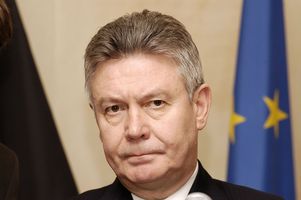 Headed for ACTA’s rejection, Commissioner De Gucht, in charge of ACTA, felt compelled to request the European Court of Justice’s opinion on the compatibility of this “trade agreement” with EU treaties and fundamental rights. Had the answer mattered to him, Mr. De Gucht should have asked this question to the Court before signing ACTA and not after. That is, if the main reason was not to buy time and save face.

It is still unclear if the EU Parliament will fall for this strategy and help Mr. De Gucht. The various political groups are hesitant as to whether or not they should follow the new rapporteur, David Martin in his attempt to have the Parliament also ask a question to the EU Court of Justice. In practice, EU treaties define very narrowly the only question that can be asked4See art 218.11 TFUE: http://euwiki.org/TFEU#Article_218, so this move would have no other effect than legitimizing Mr. De Gucht’s strategy and accepting to postpone Parliament’s decision after the answer of the Court.

The British rapporteur David Martin, from the Trade (INTA) committee, also seems to be helping Commissioner De Gucht by attempting to defuse the opposition within the Parliament, and making sure the latter doesn’t take an irreversible decision. David Martin announced he would turn the Parliament report into an “interim report”5An interim report is equivalent to a resolution. See rule 81(3) of the the EU Parliament rules of procedure: “Where Parliament’s consent is required for a proposed legislative act or an envisaged international agreement, the committee responsible may decide, in the interests of achieving a positive outcome of the procedure, to present an interim report on the proposal to Parliament including a motion for a resolution containing recommendations for modification or implementation of the proposed act.” (our emphasis). Source: http://www.europarl.europa.eu/sides/getDoc.do?pubRef=-//EP//TEXT+RULES-EP+20120110+RULE-081+DOC+XML+V0//EN&navigationBar=YES, while the other committees working on ACTA will continue to meet, draft and vote on opinion reports.

Such a move by the rapporteur may have the obvious effect that once finalized –potentially in the next six months, the original time frame for a vote on ACTA before the ECJ referral– the interim report may be absolutely neutral. It could fail to recommend any vote in favour or against ACTA. The pro-ACTA would then have saved face by not having a Parliament firmly committed to ACTA’s rejection, and by postponing any decision. 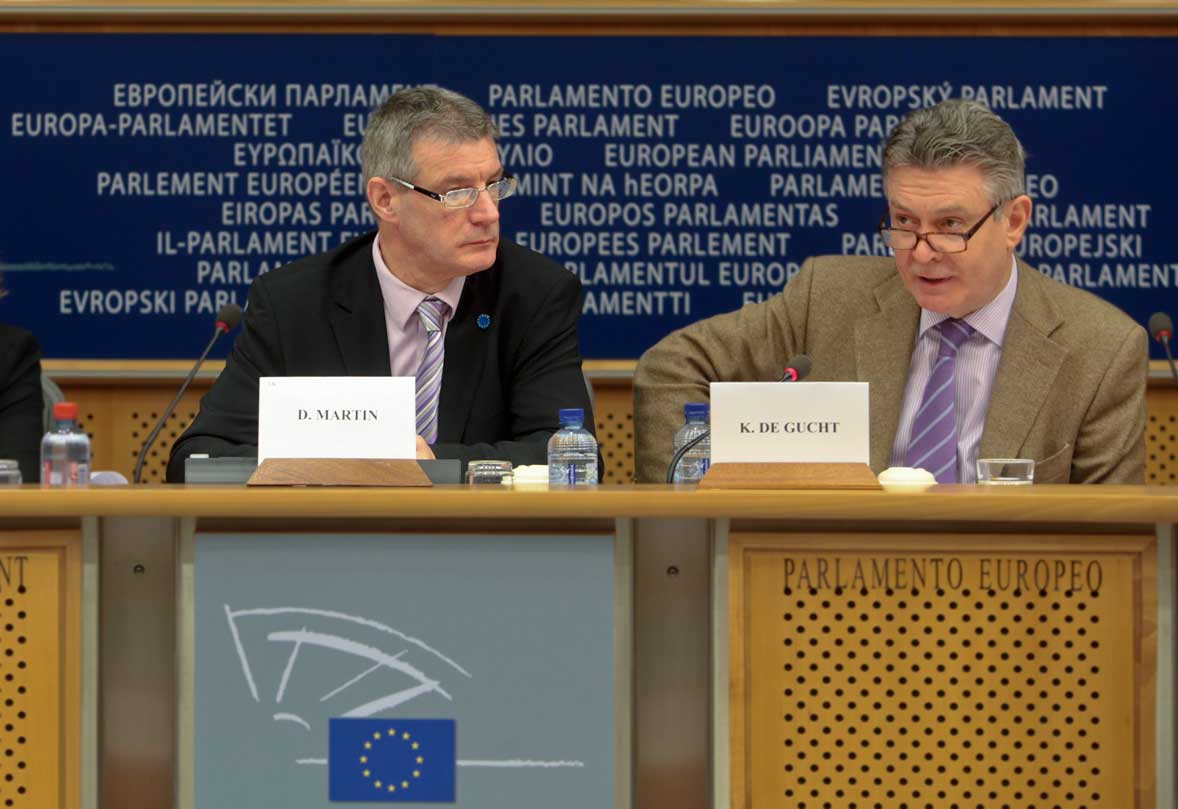 The Court may not issue an opinion on ACTA for 12 to 24 months. Commissionner De Gucht prefers this “playing-the-watch” strategy, which will spare him from seeing “his” ACTA being rejected in coming months. This will allow him to re-introduce ACTA for ratification by the end of his mandate, or even to accept a “soft burial” of ACTA (never ratified, never explictly rejected). Yet, if ACTA ever comes back for a vote, it may take place very close to the next European parliamentary elections, which will give citizens the opportunity to weigh even more in the Parliament’s decision.

It is therefore extremely important that we citizens influence each and every step of the “interim report” drafting. Members of the EU Parliament who expressed their opposition against ACTA must ensure that the report is strong enough of a political commitment, despite David Martin’s strategy of assisting Commissionner De Gucht in defusing the debate. The interim report must not be interpretable as anything else than a call for rejection.

In any case, this change of schedule forces citizens to adapt their strategy if they want to efficiently protect their freedoms online, as well as a free Internet, from the attacks of the copyright industries.

We must not wait and rest until ACTA’s potential return for a final vote before the EU Parliament. As we work towards the elaboration of a clear, strong and binding “interim report”, we must keep in mind that ACTA is only one of the many avatars of the “war against sharing” copyright industries are waging against us, the general public.

A strategic update for the next year(s)

For 15 years, copyright policy has been a miserable failure, because it has refused to take a decisive step: establishing a clear distinction between what individual users do without any profit intention (including sharing digital works between themselves) and the for-profit commercial infringement of exclusive rights. As a result, copyright policy has been weak and inefficient against commercial infringers and brutal against user rights. Moreover, resources for creative endeavours have stagnated, when they should have grown in parallel with the explosion of creativity in the digital sphere. A limited set of interest groups has prevented us from addressing the challenges of digital culture.

Such blindness matches Commissioner De Gucht’s stubborn and ideological defence of ACTA, which relays the lobbying of the entertainment industries opposing the free Internet. De Gucht’s basic argument is that “copying a file on the Internet is like stealing”6See his intervention during the INTA committee first exchange of views. “I think it’s probably fair to say that everyone in this room knows someone who, without paying for it, has downloaded onto their computer a song, an album or an episode of a television series.
I cannot, in good conscience, condone that action. I know there are some people who see this differently, young people in particular. But for me there is no moral difference between taking something that is not yours in the physical world and doing so in the virtual world. Illegal file sharing means money that should have gone to some of the most creative people in our society does not. It is a disincentive to their work.” Source: http://europa.eu/rapid/pressReleasesAction.do?reference=SPEECH/12/136&format=HTML&aged=0&language=EN&guiLanguage=en which is a blatant absurdity from a technical and a legal perspective. It amounts to saying that “multiplication is equivalent to substraction”. This cannot be raw incompetence or ignorance on Mr De Gucht’s part, who is actually a lawyer. In a statement about the ECJ referral, he further defined EU fundamental rights as “freedom of expression and information or data protection and the right to property in case of intellectual property”. This, also, is terribly wrong7“Intellectual property is protected” is contained in art.17.2 of the European Charter for Fundamental Rights, but that doesn’t define it as a fundamental right per se, equivalent to freedom of expression or privacy., misleading and dangerous, as recalled by the UN Economic and Social Council8For the UN Economic and Social Council, the rights of authors in relation with their works in not akin to an actual property right: “It is therefore important not to equate intellectual property rights with the human right recognized in article 15, paragraph 1 (c)” of the International Covenant on Economic, Social and Cultural Rights, which protects “the right of everyone to benefit from the protection of the moral and material interests resulting from any scientific, literary or artistic production of which he or she is the author.”.. His attempts to impose through the backdoor the notion that copyright must be balanced against freedom of speech or privacy would alone justify Mr De Gucht’s resignation.

Such obstination illustrates the way repressive legislations have been constantly pushed and stacked, one after the other, for the past 15 years9The 1994 WTO TRIPS agreements, the 1996 WIPO Copyright Treaty, recurring attempts for a “Broadcast Treaty”, the EUCD in 2001, the IPRED 2004, the IPRED2 in 2005, Hadopi in 2007, attempts to hijack the EU Telecoms Package 2009 and SOPA/PIPA in 2011, just to name a few. with little or no impact assessment and a constant disconnect from actual social and cultural practices or technology.

ACTA is the most impressive and dangerous attempt to date, as it was designed by governments to bypass democratic processes and international institutions. But many other initiatives are ongoing10The fact that US SOPA/PIPA have been shelved after the impressive online protests that took place is in great part due to the upcoming US elections, but both bills may come back soon afterwards. The Trans-Pacific Partnership also comes to mind. and should be seen as as many opportunities for citizens to speak up. At the EU level, there are many crucial debates currently taking place:

Copyright has gone sick, expanding like a cancer, endangering our freedoms and the free Internet. Members of the EU Parliament are beginning to understand how genuine and important our concerns are. But more of them still need to be convinced, and all of them must be put under democratic scrutiny, if not citizen pressure, until our legitimate demands are met. The EU Commission and governments must follow.

We have a historic responsibility, which goes beyond ACTA and relates to the way we live, work, learn, and share culture. Collectively, we build, own and share the free Internet as a common good, and use it to try to make our world better.

So let’s celebrate our future victories, while keeping up the hard work which will make them unavoidable!