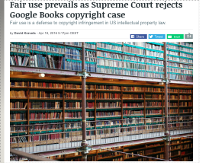 The Supreme Court on Monday declined to hear a challenge from the Authors Guild and other writers claiming Google’s scanning of their books amounts to wanton copyright infringement and not fair use. The guild urged the high court to review a lower court decision in favor of Google that the writers said amounted to an “unprecedented judicial expansion of the fair-use doctrine.”

At issue is a June decision by the 2nd US Circuit Court of Appeals that essentially said it’s legal to scan books if you don’t own the copyright. The Authors’ Guild originally sued Google, saying that serving up search results from scanned books infringes on publishers’ copyrights even though the search giant shows only restricted snippets of the work. The writers also claimed that Google’s book search snippets provide an illegal free substitute for their work and that Google Books infringes their “derivative rights” in revenue they could gain from a “licensed search” market. […]