Paris, 5 May 2015 – The French Intelligence Bill was adopted today by the National Assembly1Lower chamber of the bicameral French legislative system despite massive cross party opposition against the text’s highly harmful measures. With 438 votes for and 86 against, French citizens’ representatives have given the Prime Minister the power to watch, massively and with little control, the French population. This is one more step backwards regarding the separation of powers in France, a founding principle of our democratic regime. La Quadrature du Net strongly condemns this surrendering of democratic principles and calls on senators, who will be voting the bill next, to counter this unacceptable vote.

The Intelligence Bill, which was presented on the fast track on 19 March by French Prime Minister Manuel Valls, rallied a very large, argued and vigorous opposition, from a number of civil rights associations, collectives, lawyers’ and magistrates’ unions, but also administrative authorities such as the CNIL (French Data Protection authority) and the CNCDH (French National Consultative Committee for Human Rights). 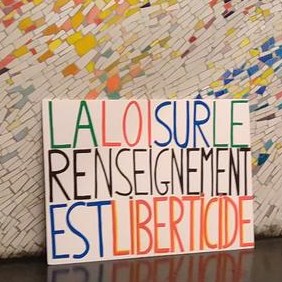 Presented by the Government as a law both necessary and necessarily consensual, the bill however sparked growing opposition within the National Assembly itself from MPs from all sides of the political spectrum, who courageously faced the slanderous insinuations of anti-patriotism or incompetency hurled at them by Minister of the Interior Bernard Cazeneuve or rapporteur Jean-Jacques Urvoas. The evolution of political positions, increasingly hostile to the text as it was studied and analysed in-depth, shows that the government’s choice to fast-track a bill concerning such a complex and fundamental issue was a political strategy, one of a denial of democracy and an insult to Parliamentarians’ work.

Despite this strong opposition, the amendments tabled in April weren’t enough to significantly modify the Bill and the most harmful measures were kept:

Today, those who objected to the Intelligence Bill will remember the list of MPs who refused to safeguard the fundamental liberties of French citizens. They call on senators, now in charge of examining on the text, to modify it in-depth in order to turn it into a real framework for the protection of citizens and the monitoring of intelligence services.

“The French Intelligence Bill brought forward questions that are the basis of our democracy: fundamental liberties, the separation of powers, control of the public power. The French government’s attitude and the MPs’ decision – unworthy of them – shows to what extent a citizen upheaval is now necessary to save the democratic principles of our country. We call on the senators to take the lead on this bill and ask the many citizens who took action against the bill to not let the pressure off their representatives.” declared an outraged Philippe Aigrain, co-founder of La Quadrature du Net.