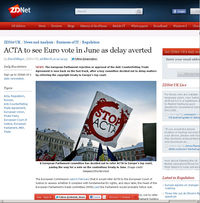 The European Parliament rejection or approval of the Anti-Counterfeiting Trade Agreement is now back on the fast track, after a key committee decided not to delay matters by referring the copyright treaty to Europe’s top court. […]

The various political groupings represented in INTA had differing reasons for voting as they did, the European Parliament said in a statement on Wednesday morning. […]

The result of Tuesday’s INTA vote was welcomed by digital rights activists, who are strongly opposed to ACTA and saw the Commission’s plan to refer it to the European Court of Justice as a delaying tactic. Activist group La Quadrature du Net said the decision means “the door remains open to a swift rejection of ACTA “.

“This vote is the first real test for the balance of views in the EU Parliament since the global anti-ACTA citizen movement took off,” La Quad co-founder Philippe Aigrain said in a statement. “It demonstrates a growing understanding of ACTA’s issues by a wide range of MEPs, and an ability to avoid the procedural traps set up by the EU Commission and some pro-ACTA MEPs. It is a promising step, but only the final rejection of ACTA will settle the issue.” […]