Make your voice heard by responding to the European Commission’s public consultation on Net neutrality! The more citizens and NGOs submit their own responses to the questionnaire, the more chance we have to collectively weigh in the EU policy-making process to ensure that the Internet remains a free and open communications architecture. You have until September 30th to send your submission and tell the Commission to protect the Internet.

Why you should send your own submission to the Commission? 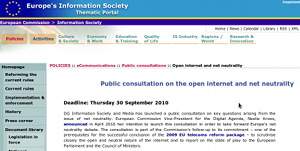 In November 2009, the European Commission released a “Declaration on Net neutrality” in which it said it would report to the Parliament and Council before the end of 20101http://www.laquadrature.net/wiki/Commission_Declaration_on_Net_Neutrality_20091123. Before doing so, the Commission wants to hear from stakeholders and has launched a questionnaire in this purpose2See the Commission’s press release: http://europa.eu/rapid/pressReleasesAction.do?reference=IP/10/860&format=HTML&aged=0&language=EN&guiLanguage=en . But big telecoms corporations as well as copyright lobbies are hand in hand to push for the end of neutrality so as to boost their commercial revenues, and there is no doubt that they will answer to the Commission’s consultation.

If they have their way, the intense innovation and democratic participation enabled by the Internet would be harmed, as Internet Access Providers would increasingly discriminate against certain types of data flowing through their networks to develop new business models based on traffic prioritization. They could asphyxiate potential competitors and further expand their ties with powerful content industries able and willing to pay in order to benefit from unfair priority on the Internet. Such practices would stifle innovation and hinder the development of new efficient business models that fully rip the benefits of the digital economy. They would also undermine diversity and pluralism in the new information ecosystem, which are both fundamental characteristics of the Internet and represent a historical contribution to our democracies. In order to safeguard the freedom of communication that all Internet users enjoy nowadays, citizens and NGOs all across Europe must massively tell the Commission to put the public interest first and protect the common-good nature of the Internet.

How to to draft your submission?

It’s up totally to you:

As you will see, the consultation is comprised of 15 questions, which cover current discriminatory practices, traffic prioritization, “managed services”3”Managed services refer to communications networks for which specific characteristics may be guaranteed by the network operator. They are distinct from the “best-effort” Internet, consumers rights as well as other topics. Obviously, some of them are quite technical, but again you don’t have to answer all the questions. Question 154Question 15 reads as follows: “Besides the traffic management issues discussed above, are there any other concerns affecting freedom of expression, media pluralism and cultural diversity on the Internet? If so, what further measures would be needed to safeguard those values?“, for instance, appears to be broad enough for any citizen to express their views to the Commission regarding their attachment to the principle of Net neutrality and how best to protect it.

Although we can’t prejudge the content of the forthcoming report, submissions from citizens and civil society organizations will be highly needed. Indeed, the questions’ wording suggests that the Commission is not necessarily keen on enacting regulations that would enshrine the principle of network neutrality in European law. The Commission tends to think that the provisions of the Telecoms Package – which establish transparency so that consumers can switch access providers if the latter is messing up with the Internet traffic – is in and of itself enough to protect Internet users. This is not sufficient to guarantee fundamental freedoms. First of all, competition between providers is far from being a reality in many areas of the EU. Second, nothing would prevent all providers to start discriminating their traffic. That’s why we need a pro-active stance on Net neutrality, with the adoption of ad hoc regulations to protect this principle.

Where can you find relevant resources to draft your submission?

Here is where you can find some resources as well as background information to help you draft your response to the Commission:

Much more information is available on the Web on the matter. In particular, organizations such as Free Press, Public Knowledge or the EFF extensively covered this issue in the United States.

Together we can act to make sure that Net neutrality regulation becomes a reality:
Send your submission to
INFSO-NETNEUTRALITY(at)ec.europa.eu by Thursday, September 30th!